This article is for all users of the platform.

Written by Adèle Hosek
Updated over a week ago

Find more information on the poll function in this article. 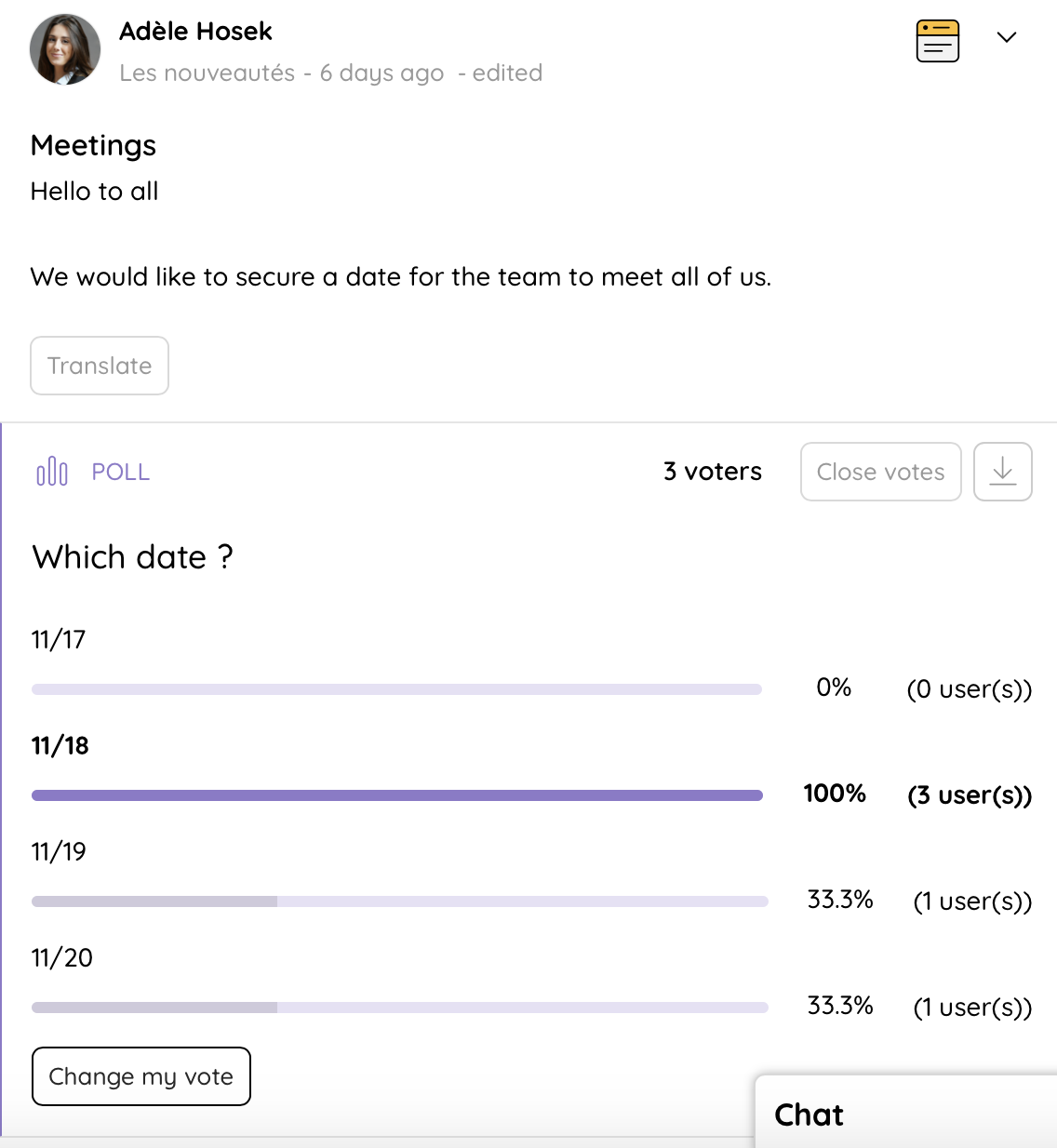 Who should read this article?

This article is for all users of the platform.

Who can use this feature?

All members of the platform can use the poll.

Good to know: if a group administrator doesn’t allow members to publish in a group, the poll won’t be accessible.

The poll is available in the standard and premium plans.

The creation of a poll

The poll is an option linked to your post. It can be created in two ways:

The different types of answers

You can choose among several types of answers: 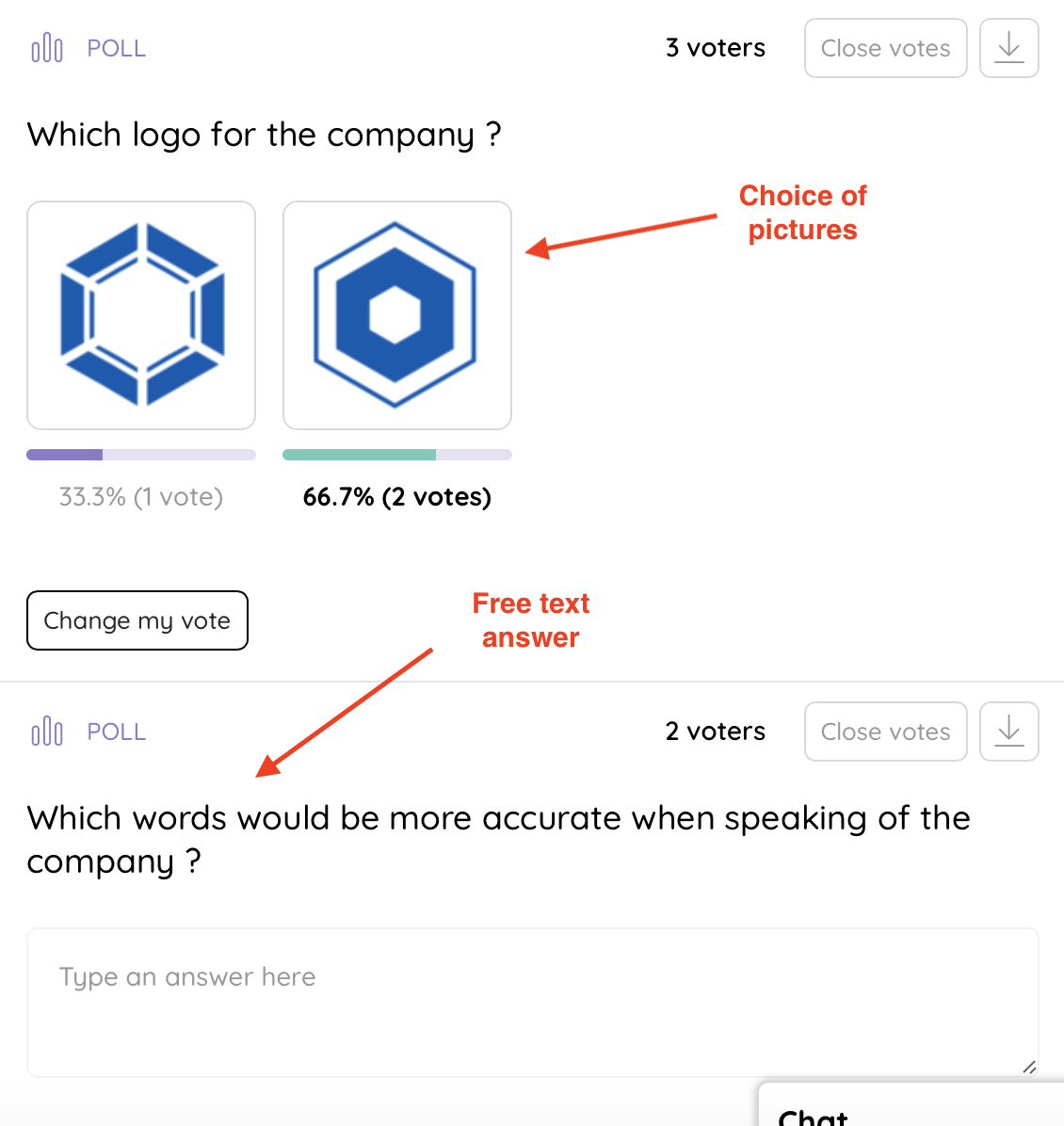 NB: There’s no limit to the number of polls created in a publication.

You can anonymise the answers by checking the "anonymous poll" box. With this option, it will no longer be possible for you or group members to see who's completed the poll.

If you want to edit your post to make it an anonymous poll, no member should have voted. As soon as a member votes, this option is no longer available.

The users can select an answer in checking a box and then click on “Vote”. They can modify their vote by selecting the "change my vote" option.

Once a member has voted, his name will appear in the voting list.

To access this list, simply drag your computer's mouse over the number of voters in the poll.

This list is visible to all members of the group. However, it’s not possible to see which member voted for which proposal except for the author of the poll who can read these information in the excel export if the poll is not anonymous. 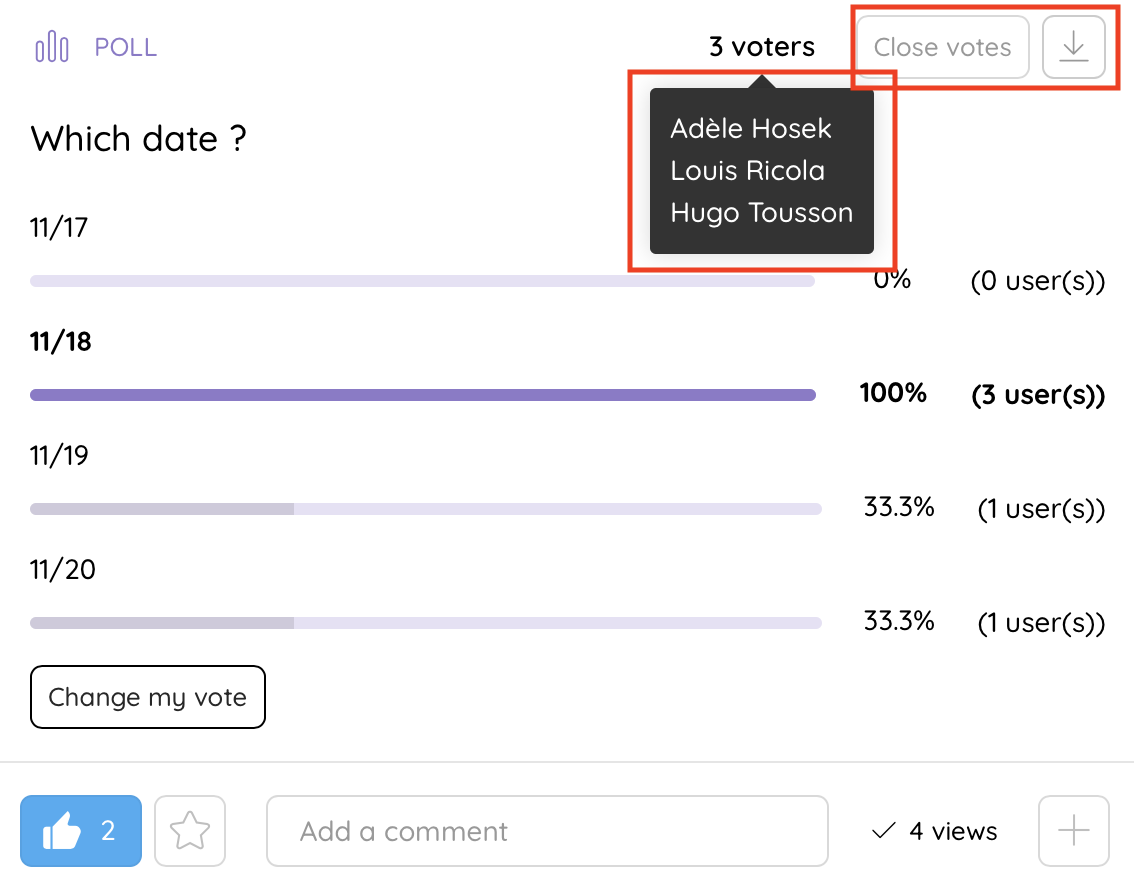 In an anonymous poll, this list of participants won’t appear and will be replaced by the mention “this poll is anonymous”.

Only the author of a poll will be notified of the actions related to its post (vote, reaction, response, comment, ...). If the poll is anonymous, this alert will not specify which user has voted.

The percentage of successful answers

Thanks to a percentage, we can see which answer is the most successful.

If you feel that you've received enough answers to your question, you have the option to "Close Votes" and block future answers. If you change your mind, you can "Reopen Votes".

Only the poll author has the ability to close and reopen votes.

You also have the option of downloading an excel file with the data of the poll. To do so, click on "Excel Export" to the right of the "Close Votes" option.

Good to know: the "Excel Export" option appears when a minimum of one member has voted on the poll.

If your post contains several polls, you have the possibility to choose between exporting all the polls or a specific one.

Once your choice is made, you'll be able to access the excel document. If you have chosen to download an excel document for several polls, you'll find the data of each in a separate tab.

The following data will appear on the excel spreadsheet:

In the case of an anonymous poll, the excel export will replace the ID with "anonymous" and will then only display the poll responses.

What are the rights of the users of a poll?

Only the author of a poll has the ability to:

Being an administrator doesn't give any extra right on a poll. An administrator won't be able to see who's voted if the poll is anonymous, to close and reopen votes or collect the excel file if he isn't the author of the post.

A poll is not to replace a form. The list of proposals, far too long, may come to stifle the news feed and hide important posts.

The poll is used when you need the opinion of your coworkers on a specific point.

Ask questions in commenting on the poll if necessary.

Did this answer your question?